Posted on September 13, 2015 by charlesakang

Following are some photos of odd infrastructural things that I’ve noticed. In general, infrastructure here seems to be put together more haphazardly than in the US. This is perhaps understandable given how rapidly China’s economy has developed in the past few decades.

1. Below: Two views of fences on the sidewalk, taken near the Panjiayuan Flea Market. It’s not entirely clear to me why this sidewalk has fences running along it. Possible purposes that I can think of include preventing vehicles from driving on the sidewalk, promoting single-file walking, and helping blind people find their way. Most sidewalks that I’ve been to here do not have fences like this.

2. Below: Telephone (?) lines near the Workers’ Stadium. In the first photo, the lowest line is about four feet off the ground. I’ve almost absent-mindedly walked into this line several times. In the second photo, notice the general disheveledness and the circular roll of line halfway up the telephone pole at the center-left of the shot. A similar roll of extra line also is visible in the top left corner of the upper photo. My interpretation is that the construction guy had a line that was too long and, instead of shortening the line, decided just to roll up the extra line and put it on the pole. Alternatively, the extra line might be there for good reasons. Maybe it’s convenient to have extra line dispersed randomly throughout the system because it helps with repairs. 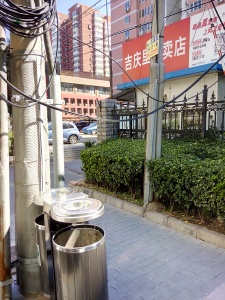 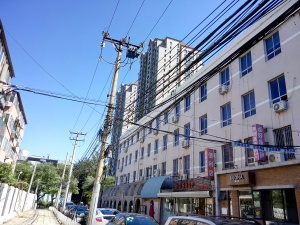 3. Below: Storefront near Houhai. Notice the electric scooter charging on the sidewalk via a wall outlet powered by an extension cord suspended from the roof overhang by a piece of wire (coat-hanger?). One of problems facing electric vehicles is that many vehicles live their entire lives on city streets (i.e., their owners don’t have garages), so it can be hard to find places to charge up. This scooter owner has engineered a clever solution to that problem. Also, the store manager appears to like to hang electrical things from the roof overhang — notice the light bulbs on the left storefront, and compare with the built-in-the-roof lighting fixture on the right storefront.

As an aside, I suspect that the guy who put together the scooter charging station has the potential for a brilliant career as a Banksy-style avant-garde urban artist. The use of mixed media in this composition makes a statement about the complexity of the real world. The gray of the concrete building clashes with the bright colors in the sign, vehicle, reflections of trees in the windows, and charging station (in particular the liberal use of blue duck tape). On closer inspection, the building’s gray isn’t absolute — notice the chiaroscuro — and the red on the scooter is tarnished by urban grime. This scene is located in a world that is much richer than any world imagined in science fiction, and would be equally out of place in worlds both paradisaical (think Earth in Star Trek) and dystopian (think Earth in Blade Runner).

Meandering thoughts on legibility from difference

My Modern Irish Literature instructor in Spring 2006, Daniel Melia, said something that comes to my mind frequently these days. I don’t have the exact words, but the main idea is along the lines that it’s hard for a person to see what’s unusual about his home society. Going to a different place enables a traveler, by way of contrast, to see the unusual characteristics of both the place visited and home. (Apologies for the awkward wording.) The example that I remember Prof Melia talking about is that Tocqueville, visiting America from France, made a big deal about how Americans kept pets around just because they liked them (i.e., the pets served no working purpose). From this, people today infer that French aristocrats in the early 19th century didn’t usually have pets.

During the time I’ve spent wandering around Beijing, I’ve seen this legibility-from-difference in action. I’ve noticed how life in Beijing differs in many small ways from life in the SF Bay Area, and this has led me to reassess some of my views about American society. Some of these infrastructure observations are like this. For example, Chinese attitudes toward safety appear much more relaxed than American attitudes, but I wonder if this is really so much of a problem if the result is that ordinary people do fewer stupid things in their ordinary lives. Maybe this can be related to the envelope theorem.