I went to southern Gansu with a tour group (and my dad) at the beginning of August. For those unaware, Gansu is a province located in the western part of China. Southern Gansu is mountainous and is perhaps analogous to Wyoming or Utah in the US. This analogy holds weakly for human as well as physical geography, as both the US Mountain West and Gansu have lots of religious minorities (LDS/Mormons in the US Mountain West, Muslims and Tibetan Buddhists in Gansu).

The first stop was Lanzhou, which is the capital of Gansu. Lanzhou is famous for having the Yellow River pass through it. The below-pictured bridge over the river was named after the revolutionary leader Sun Yat-Sen. The bridge was built ca. 1919 by the Germans and was guaranteed at the time to last 100 years. We’ll soon see if it makes it the distance:

Lanzhou also has a famous sculpture of mother and child:

After leaving Lanzhou, we spent a day in the area near the municipality Lingxia. We visited the former home of a Republican-era Chinese Muslim warlord:

Later that day we went to a Tibetan monastery and village near Lingxia. The monastery had sculptures made out of furry ox (similar to a cow) butter:

The village was poor: 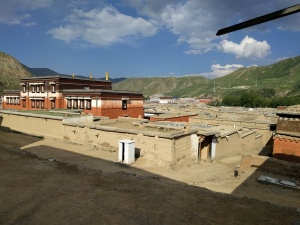 The town we stayed in that night had a weird sculpture in its town plaza: 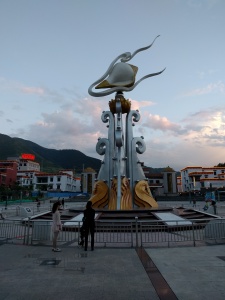 The next day we spent some time in the mountains. We went to a high marsh called “flower lake”:

We visited another Tibetan monastery:

The following day we visited some rivers. Below is a photo of the headwaters of a tributary to the Yangtze river: 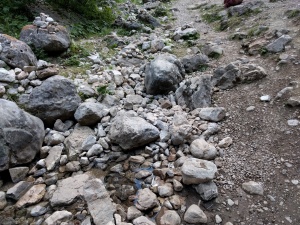 We also visited a famous bend of the Yellow river. The scenic point had an escalator to the top. 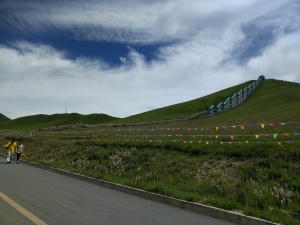 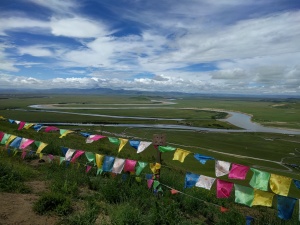 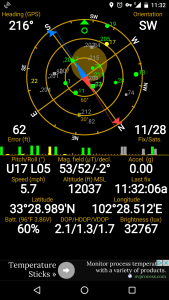 The following day we went to so-called Chinese Grand Canyon. It looked nothing at all like the American Grand Canyon:

On the last day we went to yet another Tibetan Buddhist monastery:

We also stopped by a county nature museum, which was much bigger than I expected. The museum seemed to be focused on dinosaurs and large grazing mammals: 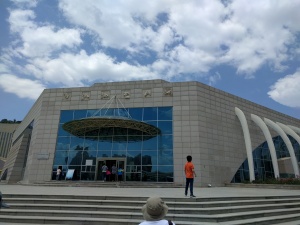 The museum had a nice note on the geologic time scale:

All evidence indicates that at least one person in western China is aware of Creationism: