Posted on December 2, 2015 by charlesakang

Prior to coming here, one of my main concerns about life in Beijing was poor air quality. It turns out that I moved here at a time of year (fall) that typically has good air quality, and this year had an unusually pleasant fall. Because of this, I eased my way into experiencing air pollution firsthand. For the better part of my first three months in Beijing, the air quality was good or at least OK more than half of the time, and was bad less than 20% of the time. Only in the past few weeks with the start of centralized heating (clean gas-fired in Beijing, but dirty coal-fired in Hebei, the province that surrounds Beijing, and we share the same airshed) have there been long stretches of bad air quality.

Probably the thing I expected least about air pollution was the level of temporal variability of air quality. Air pollution levels change as rapidly as any other atmospheric quantity such as temperature, wind, humidity, etc. It can be miserable one day, and completely clear the next. In fact, I find that I notice variability in air quality more than I notice variability in things like temperature and humidity, maybe because air quality is so easy to see and is so unpredictable (for example, I usually expect it to get cooler at night, but I have no idea when it will get clearer).

The air was awful this past Monday 11/30 and Tuesday 12/1. Beijing air pollution made international headlines: https://www.washingtonpost.com/news/capital-weather-gang/wp/2015/11/30/beijing-chokes-on-off-the-charts-air-pollution-as-thick-smog-settles-over-northern-china/. Flights were delayed and traffic jams happened because of visibility issues. The map app on my phone gave me alerts about pollution and warned me to stay inside.

To illustrate the practical reality of this pollution, I begin by showing a picture of a view from my office on a good air quality day: 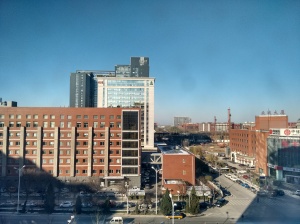 This is what the view from of my office’s window looked like on Tuesday at roughly the same time in the afternoon: 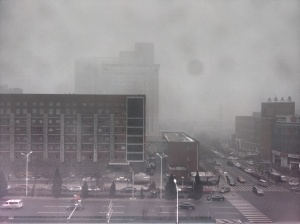 The haze in the above photo is gray/black particulate matter, not fog. This is what it looked like on Tuesday at night inside Donghuqu subway station (near my office): 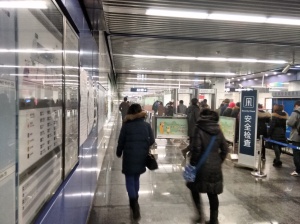 It’s a bit hard to see in the above photo, but the haze was visible inside the subway station. You can see a little bit of this if you look at the very center of the full-size version of the photo, at the farthest-away parts of the subway station (you need to click the photo to open the full size version of the photo). Also, I don’t have a photo of this, but my snot on Tuesday was dark gray. As for other senses, I could faintly smell burning on Monday and Tuesday, and I found that my throat felt dry.

Heavy winds picked up at around midnight and air quality improved very rapidly. This is what it looked like today: 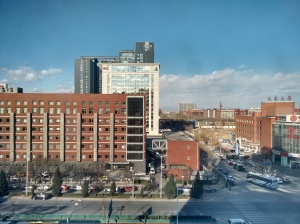 Here’s a graph showing hourly measurements of particulate pollution from Tuesday to Wednesday measured at the US Embassy in Beijing (which is between where I live and where I work), taken from http://aqicn.org/city/beijing/chaoyangnongzhanguan/:

Apologies for the small size, but basically the tall burgundy-colored bars should be read as “very bad air quality” and the very short green-colored bars should be read as “good air quality.” The abrupt shift from burgundy to green happened at about midnight. For the highly interested reader, I discuss some more quantitative measures of air quality at the bottom of this post, and also provide numbers to go with the above photos.

I own three do-it-yourself air filters. They are not as effective as commercial air filters (lower air throughput and noisier), but are about 90% cheaper than comparable commercial filters and they get the job done. The DIY filters consist of a normal fan attached to a HEPA filter, which is made out of a folded synthetic canvas-like material. One nice thing about the DIY filters is that they are simple to disassemble so it’s easy to see what the filters look like before and after use. Here’s a photo of one of my filters: 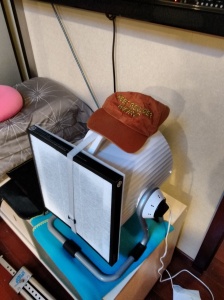 Below are photos of two HEPA filters, one new and the other after being used for a couple months: 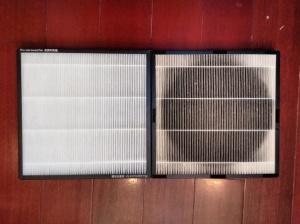 It’s pretty clear from the discoloration of the HEPA filter on the right that the filter is doing something. I also have some face masks that I wear when the air quality is very poor. The masks appear to do something, as seen in the below photos of the new and used face masks: 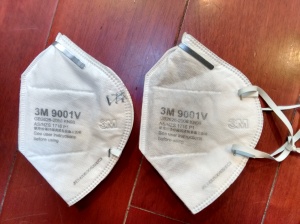 I planned originally to include more scientific discussion of indoor air quality in this post, focusing on some calculations regarding air filters. I find that this post is running a bit long so I will save this for later. I’ve been interested in the science of air pollution for a long time — in fact, one of my favorite classes in college was Air Pollution taught in EPS/ESPM by Allen Goldstein in Fall 2006 — so I’m pretty excited to work on this next post.

The Air Quality Index is a number that is at least 0 and increases with increasing level of air pollution. The purpose of AQI is to relate measurements of pollutant levels (e.g., density of a certain size of particulate matter in air) to impacts on human health. Values of 0-50 are “good,” 50-100 are “moderate,” 100-150 are “unhealthy for sensitive groups,” 150-200 are “unhealthy,” 200-300 are “very unhealthy,” and over 300 are “hazardous.” The verbal interpretations attached to these values are based formally on short-term health effects (difficulty breathing, etc.) at continuous exposure for a 24 hour period, but in practice most people that I know seem to use AQI values as general indicators of current air quality. The AQI scale technically tops out at 500, but often people will extrapolate off the scale if air quality is especially poor.

In principle, AQI values aggregate health impacts from all kinds of pollutants, but in practice most reported AQI values consider particulate matter only and are calculated using a conversion from particulate number density (number of solid particles of diameter smaller than 2.5 microns per unit volume of air). If you work out the math, the relationship between AQI and particle number density ends up being roughly linear. It turns out that AQI can be calculated roughly by dividing the number density per cubic foot of particles of density greater than 0.5 micron and smaller than 2.5 micron by 100, which is convenient because one of my sensors (I own two) reports this quantity.

Some numbers that go along with the pictures for 11/26, 12/1, and 12/2 are as follows. The average outdoor AQI on 11/26 and 12/2 was less than 50. On 12/1, the average outdoor AQI was clearly above 500 (maybe 600 or so). Consistent with my experience that indoor AQI (without air filters) is usually about 30% better than outdoor air quality, inside my apartment at night the AQI before turning air filters on was about 400, according to my sensor.